We inform you about the ginseng, mysterious medicine that has been used for 5,000 years.

Name and Origin
Classification and Category

The origins of ginseng 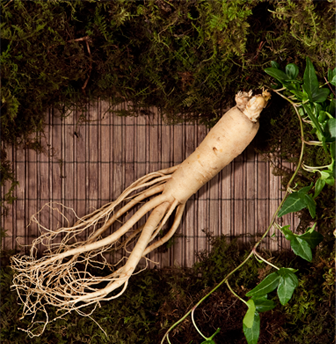 The Korean peninsula is the best place to grow ginseng, because ginseng has stringent requirements for the plant’s growth, and Korea has the ideal temperature zone, plenty of rain in the summer, proper coldness in the winter, etc..

The value of Korean ginseng has been known in the world since the 4th century B.C. Books written in this era documented ginseng as emergent medicine and tonic for long-life. Ginseng was first mentioned as a tonic as early as 48-33 B.C. in Interpretation of Creatures written by You Shi of ancient China.

The name of the ginseng

That traditional name of ginseng is “Shim” The etymology and date are not known, but “Shim” was written in many medicinal books of the ‘Joseon Dynasty,’ and it is still used among pickers of wild ginseng. Korean ginseng seems to be named after its physical resemblance of people in far-east Asia. The Chinese character gin means men, and seng represents the genus name Panax. There are six to seven species in plants in the genus Panax, but only three of them are cultivated economically and distributed as a product in the world. Panax ginseng C.A. Meyer, the Korea ginseng species, is cultivated and distributed in Far Eastern Asia, including Korea and China. Panax quinquefolium L, an America ginseng, is cultivated in America and Canada. Panax notoginseng(Burk) F.H. Chen(Sanchi), is produced in Southern China, geographically. Korean ginseng is different from the species of American ginseng and Sanchi. In general, the Korean ginseng is called ginseng with use of the letter ‘gin’, and only refers to Panax ginseng C.A. Meyer.

U.S. and Canadian distribution in the area.

Sichuanese opera in southern China, R., a shrine to gwangseo

Engler the system of classification

Ginseng, a medicinal herb, has long been used in maintaining physical vitality throughout he far-eastern countries including Korea and China. Carl Anton Meyer, a Russian botanist, named it Panax ginseng C.A.Meyer, in 1843.
The genus name Panax means ‘cure all’ in Greek. The Ginseng root produced in Korea has been most highly prized so as to gain the popular name, Korean ginseng.

Its siblings are found in North America, Japan, China, and Russia, but they are different from Korean ginseng in strain, morphology, and composition. Korean ginseng, Panax, ginseng C.A.Meyer, belong to the family Araliaceae and genus Panax to which six species belong. From the ancient times only Korean ginseng has been used medicinally, whereas several other Panax species has become in use in recent days. Eleutherococcus senticosus does not belong to the genus Panax, but it is called Siberian ginseng only to take ride on the popularity of Korean ginseng.